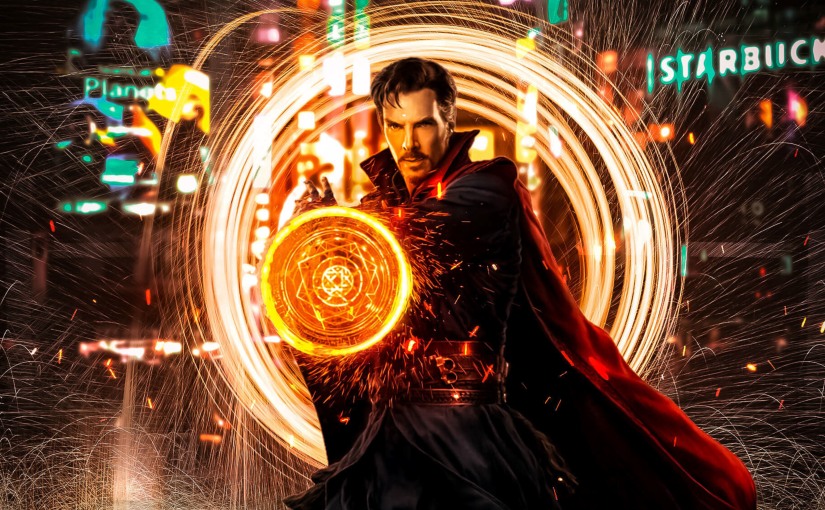 Played by Benedict Cumberbatch, Doctor Strange is a unique hero capable of numerous feats and is quite possibly one of the most powerful characters in the Marvel Cinematic Universe (MCU). He has access to an arsenal of spells that allows him to conjure weapons and shields, teleport, transmute objects and bend reality at will. Furthermore, he can enchant objects and utilise relics, such as the Cloak Of Levitation, to amplify his power. So just how powerful is he? My answer? Extremely, ridiculously powerful. But why? In this article, we will attempt to gauge the true extent of his powers. Before you continue reading, do follow me and subscribe to my newsletter! And without further ado, let’s jump right in!

Abilities And Strengths Of Doctor Strange

Stephen Strange was once a brilliant and renowned neurosurgeon. Possessing a photographic memory, he was able to attain both his M.D. and PhD concurrently. However, after suffering a devastating car accident and losing the use of his hands, he desperately began searching for ways to treat them. Eventually, he arrived at Kamar Taj, where he was taught sorcery by the Ancient One despite his initial scepticism towards the mystic arts. Using his photographic memory, he was able to master Sanskrit and many spells in a short period. He was even able to properly utilise the Eye of Agamotto, which was only accessible to the Sorcerer Supreme and highly-skilled masters. We saw that he was also able to hold his own against Kaecilius and his zealots, who had more experience in the mystic arts. Later, he was also able to utilise the Eye of Agamotto to create an endless time loop to imprison both himself and Dormammu, which no doubt requires much skill. Here, we also see his creativity and tactical skills in action. Knowing that Dormammu existed outside of time, he reasoned that unlike normal beings bound by time, Dormammu would soon understand that he was in a time loop. In comparison, if he were to use this tactic on a being bound by time, then the same sequence of events would happen over and over without change. Here’s the thing. Dr. Strange would only have bargaining power if the enemy perceived that he was in a time loop. If Dormammu didn’t exist outside of time, then he would just kill Dr. Strange over and over and a bargain would have been impossible.

We must remember that Dr. Strange, though a magician as he is, is still a human. Therefore, he has human weaknesses, such as limited reaction speed. The cloak makes up for this weakness by providing him precognition and by blocking close range attacks, as it did when Kaecilius attempted to stab Dr. Strange in the New York Sanctum. One musn’t also forget that the cloak possesses sentience and has a mind of its own – recall that it pulled Dr. Strange over to the Crimson Bands of Cyttorak (physical relic) when fighting Kaecilius. Indeed, it is able to provide sensible and practical suggestions to Dr. Strange if needed. Lastly, it is able to pull Dr. Strange away to safety in the event that he is incapacitated or severely injured.

By pushing his astral form out of his physical body, Dr. Strange is able to access the astral plane which, like the Mirror Dimension, exists parallel to the real world. This ability allows him to resume activities such as reading even while physically sleeping or conduct surveillance if needed. He is also able to separate the astral form of others from their physical body, thus instantly disabling them – as Dr. Strange did to Spiderman in No Way Home. If done successfully on an enemy, it’s an immediate K.O.

In Dr. Strange, we find that the Ancient One used the rituals from the Book of Cagliostro to siphon power from the Dark Dimension in exchange for centuries of life. Unlike Kaecilius, the Ancient One possessed adequate skill to control the effects of the spell and prevent it from corrupting her body and mind. What’s to stop Dr. Strange from doing the same?

This spell allows Dr. Strange to create countless copies of himself, in essence massively multiplying the power of any one spell while confusing the enemy. Thanos had to deal with this using the Soul Stone and the Power Stone.

The Crimson Bands of Cyttorak in its spell form allowed Dr. Strange to single-handedly restrain Thanos from using the infinity gauntlet. This is a remarkable feat, given the Mad Titan’s immense strength and the fact that many other characters came nowhere close to doing so.

Dr. Strange is able to alter the physical form of various objects, inlcuding Thor’s Mjolnir, which he transformed into an umbrella. He was also able to transmute the black hole which Thanos sent towards Dr. Strange into butterflies.

Dr. Strange has had the opportunity to train in hand-to-hand combat with his peers in Kamar Taj. We see his skills in action when he fights Karl Mordo in Dr. Strange: Multiverse of Madness. He is also able to fight Thanos with an Eldritch sword he conjured.

It is the first relic given to every sorcerer and using it is a basic skill. Nevertheless, it already provides tremendous power and practical use. With his Sling Ring, Dr. Strange is able to traverse great distances in an instant and access otherwise physically inaccessible locations. With this, he is able to conduct surprise attacks on his foes, transport items with ease or even secretly steal objects from secure locations.

Using the Runes of Kof Kol, Dr. Strange is able to erase selected memories from the minds of people across the universe. Here we see that he is able to manipulate and even possibly enslave the whole universe if he wanted to. This is just a small taste of the full extent of reality warping powers he possesses.

We still have no idea what other tricks Dr. Strange has up his sleeve. Already, we see that he is a very versatile hero who is able to handle a variety of situations. He will only become more powerful as time passes and as he studies the mystic arts to a greater depth. Overall, he is indeed one of the most formidable characters in the Marvel Cinematic Universe and should not be trifled with.